I’ve written and talked about impostor syndrome at length. Here is one early sample , and another . I’m still plagued by these feelings every once in a while, that I’m just acting like I know things instead of actually knowing things. I’ve heard a few of my coworkers express that feeling as well. I think in part it is because I work in healthcare, but I’m not in the front lines. The front line is where the magic happens (you can’t fake setting up an IV), we are all there just for support, and it is often hard to find the value we provide from the sidelines. All I can do some days is cheer like a paraplegic behind the marathon finish line. And then, there are those that should be feeling a bit like impostors but have no sign of self awareness. Do they wake up in cold sweats in the middle of the night and wonder… perhaps I should come clean to my West Virginia constituents and tell them that I’m actually a Republican in disguise? But seriously, the syndrome is real and it is very common
Post a Comment
CLICK FOR FULL COMIC This comic is made all the better when you learn that HP Lovecraft, the father of the Cthulhu mythos, was a raving racist. Here's a blog from an author awakening to this reality . And here's a quiz to determine if an excerpt was written by him or Hitler. So, making a woke Cthulhu is very cathartic to me!
Post a Comment
CLICK FOR FULL COMIC One time, after a long presentation I gave at work, a coworker took me aside and told me that she loved how simple my mind was. One ex-girlfriend once told me that I was a great boyfriend because finally she wasn't punching up in the looks department. Last weekend someone congratulated me for wearing a mask at a concert, even though they were "useless". Keeping in mind the infrequent compliments I get, it is quite striking the high proportion of them that are poorly disguised insults.  How about you, dear reader, do you have any notable examples of this? Sound off in the comments, lest I am left with the feeling that I'm the only human subjected to this tribute torture.
Post a Comment
CLICK FOR FULL COMIC 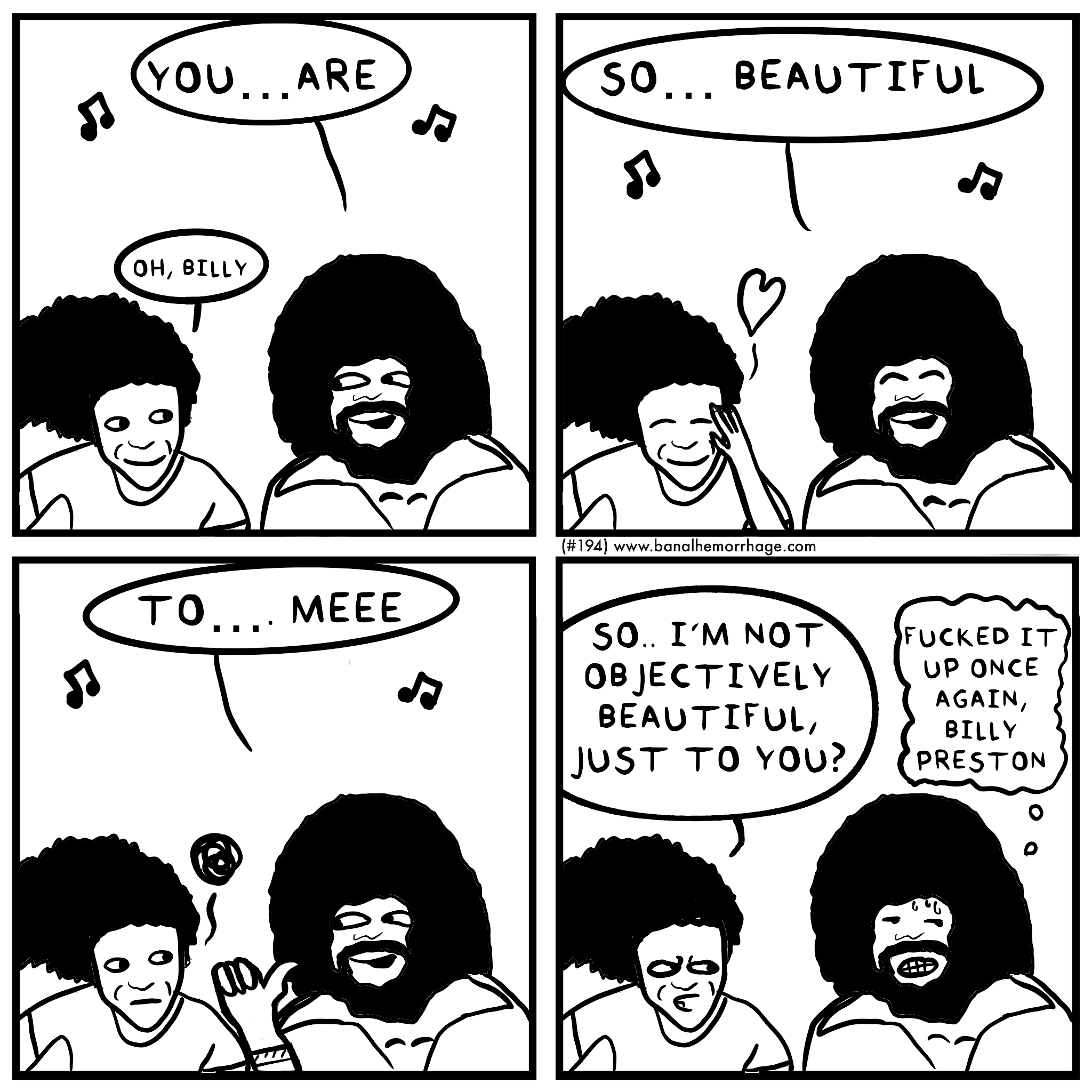 When I thought of this comic, I thought this song was created and performed by a Michael Bolton type. In a petty predictable turn of events, the original creator and composer was an African American.  And his version is perfect from the get go.
Post a Comment
CLICK FOR FULL COMIC 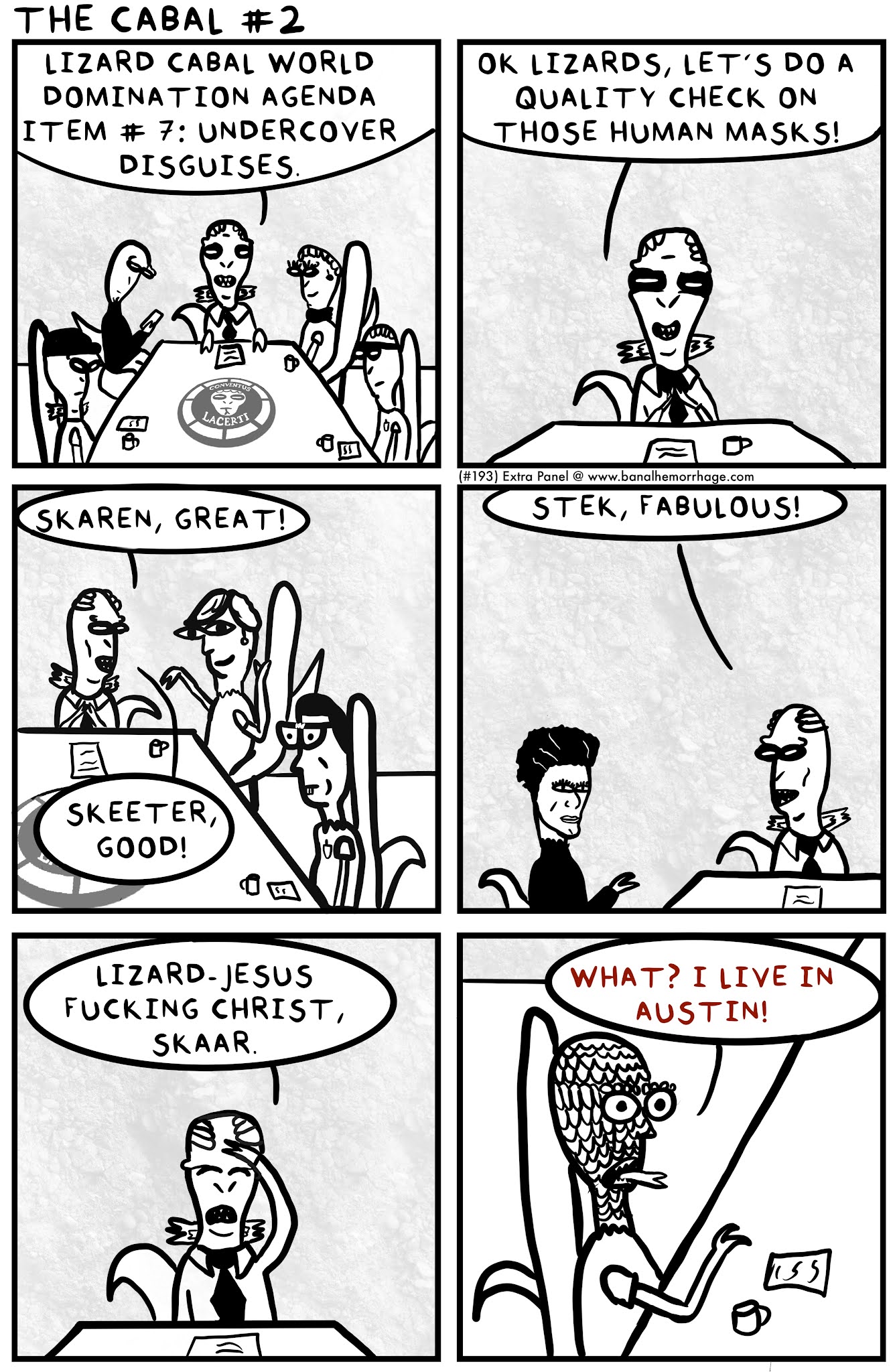 When I was doing research on lizard-men, this picture of a human performance artist always came up. He lives in Austin. In one of those late night deep dives I went to his webpage and discovered two things. One, he’s a Philosophy graduate. Two, if I would’ve had to guess what his major was, I would have guessed Philosophy.  Thelizardman.com At one point in my life, I would have scoffed at this guy. ‘What a waste of a life’ I would’ve said, while sitting in my recliner watching superhero movies and being super basic. As I’ve grown, him and others like him are what makes life interesting. You think you’ve met all possible combinations of bipedal, primate prancers, and then this guy slinks by; making you change the size and shape of all your conceptual containers.  It’s a wonderful life if you’re willing to let it be.  He seems like a cool guy but I decided to go with a less earthly version. A combination of aliens and dinosaurs was my final design note, hastily written on an iPhone note
Post a Comment
CLICK FOR FULL COMIC

One of these languishing months I set myself down in bed fully awake. Anxious and worried about everything, my mind was in quick despair.  Doomscrolling was part of this process. In between these hazardous thoughts, the idea for this comic series was sprung.  So, enjoy the fruits of my warped brain, and let me know in the comments if you like this! I have character arcs and many episodes lined up already from that one feverish night.
2 comments
CLICK FOR FULL COMIC

I'm not what most humans between the age of 18-75 would call "handy." Sure, I've fixed my dishwasher and my laundry washer a few times; but only because I really, really need those things to work. And I muttered ‘righty, tighty lefty, loosy’ the whole time. And there's always extra pieces when I'm done, which I contribute to the special drawer we all have but don't talk about. I have severe drill anxiety (Freud just raised a very judgmental spectral eyebrow). I mean, if you somehow screw up the location of your drilling, those holes aren't going to un-drill themselves are they? And what do you fill those holes with if you mess it up? Elmer's glue? Coconut Oil? Nobody taught me these things. My dad taught me how to program in Basic and my Mom taught me unconditional love. None of those things prepared me for this whole growing up scam.  I do have to give it up for YouTube though. I'd have negative handiness if it weren't for those how-to vid
Post a Comment
CLICK FOR FULL COMIC
More posts