I've been wanting a dog for a while. Roxanne has been on the fence. The eventual loss of freedom was a big gap to close for both of us, but we are glad we bridged it. Two weeks ago we got new furry companions!
Let me tell you about these dogs we got. These beings we rescued are all ears and spindly legs. Their bellies look like raw chicken wings. They are the purest manifestation of the the word 'wiggly'. They look like a combination of Doberman and goblins. As far as we can tell, they seem to suffer from dysmorphia, generalized anxiety, agoraphobia, paranoia and a glut of other mental health issues.
They don't fetch. They don't run after their human. They don't beg for food. Can they really be called dogs? To me they're more like miniature Woody Allen characters; all anxiety and twitchy eyes.
Conan is pensive and acts laid back. He thinks the world starts and ends with Roxanne. Xena is a nervous licker and either very courageous or very craven. We really can’t tell just yet.
But the thing is, they fell neatly into a hole in our puzzle. A rattling, barely kept together puzzle. It’s like everything else in my life, if you let it, it all makes sense later.
EXTRA PANEL:
There may be one itsy bitsy problem. Our two cats could eat them in one bite if they ever so chose. 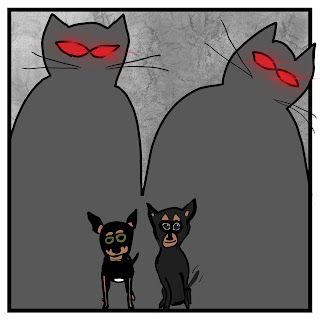