This year has been rough. I’m not going to list the ways it has been awful for most of us. Okay, I will, because I love lists:
Fires, RBG, COVID, unemployment, stress, Trump, police killings, tabloids, lost children, friends lost in cults, being home-bound, finding out Kirstie Alley is a gender-bent James Woods.

The George Floyd killing was one of the terrible things that happened, no mistaking that. However, this year, more than any other year, I found increased support for BLM. More people seem to have bought-in to the fact that Black Americans are being policed, prosecuted and punished more severely than their white counterparts. I was pleasantly surprised at some of the support this idea found, in the year of despair 2020.

Let’s talk about Republicans, though. Only about 16% of white Republicans support BLM in some way. Compare that to 88% of white Democrats. I just don’t get the Republican philosophy. Imagine being a Republican your whole life. Over the past 4 years, you have had to stand against: the environment, net neutrality, the FBI(!), Europe (but not Russia), The New York Times (but not the New York Post), BLM, masks, people opposing fascists, scientists, trade and DACA. I don’t know how so many are still on board. It must feel like those people at Nexium that started because they thought they could do some good, but all of a sudden they’re branding their bodies and sex trafficking. I went to a CrossFit class once and ran away because they seemed too cultish; but at least they recycled tractor tires. If Democrats, or any other group, made me stand for family separations at the border or against [checks notes] staying safe during a pandemic, I would run too. And I hate running. Much more of a brisk walker.

And seriously why did no one tell me about Kirstie Alley? I had to find out from reading one of her tweets! She was one of my first crushes! Right after my crush on James Woods. Nah just kidding, could you imagine? 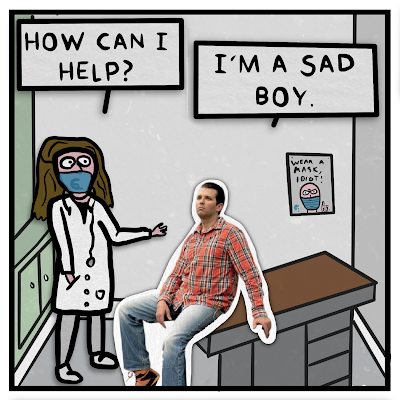