Dear readers, this is not a joke. For at least a decade, I enjoyed the fruits of my immigration status. Every awkward, weird, strange, outlandish and cringeworthy thing I did was blamed by yours truly on the fact that I was from another country.  'In my home country we used salt instead of sugar,' I'd say after messing up a recipe. 'In my home country it's normal to be barefoot outside.' 'In my home country, it's customary to get blackout drunk on Mondays.' 'In my country we say grace AFTER eating the turkey.'

Do I feel bad about it? In my home country we don't feel bad about things. But, honestly, it was great. After a lifetime of being weird and an outcast in my own country, I got to flip the script a bit and make it exotic in a new one.

It didn't last long. People caught on at around year 3. And then, in year 7 I became a citizen of the United States of America. I entered a period of diminishing results. And now, I'm back to being a barefooted, weird, socially inept person that is somehow liked by a few people. No doubt crazies themselves, but people nonetheless. 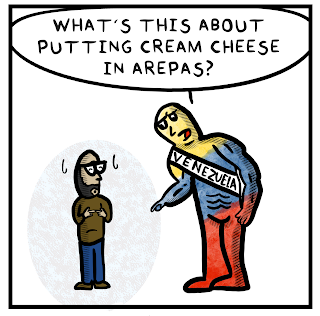