I like fake violence. I can't stand real violence. To me it's Fake Violence >>> Dr. Pimple Popper >>>>>> Real Violence. In fact, when fake violence looks too real, it loses it's appeal. There's something to the artistry of fake blood and guts that has always appealed to me, probably since my dad traumatized me by showing me Carrie at 6 years of age. That desensitized me to gallons of movie blood real quick. Thanks, dad.

As I see it, I'm living proof that video games don't cause violence. My brain, and I expect most others, can flip the switch of 'real' vs. 'not real'. Mortal Kombat on the Genesis was my babysitter for a while and never have I ever wanted to rip someone's spine from their body. Or see it happen in real life.

My wife was switching channels and landed on Dr. Pimple Popper once, and it was one of those times when I can spot a huge rift between us. While it definitely grossed her out, I could feel a part of her that was tantalized by this particular type of skin flick. I don’t have that part.

I would play this game, though! 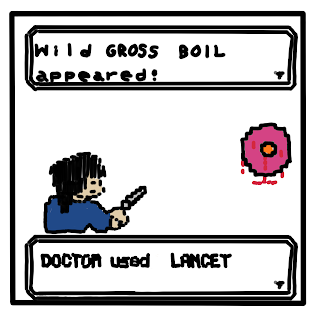 I have a small fetish around drawing over pixelated art, it's joining two of my loves and I tried it once before on this comic. It's fun!